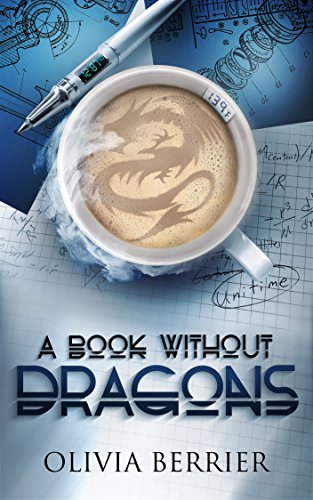 Title: A Book Without Dragons

Review: The opening to a book without dragons was, we are introduced to Willow Ayers in the year 2054, who is one of the creators of Unitime which basically controls all electronics. However, strange things start happening with clocks being wrong, phone calls dropping and much more which should be impossible due to Unitime’s technology. We begin to see how this begins effecting everyday people and when we are finally introduced to Willow’s perspective we learn that he might not be able to fix the system, he might just have to stabilize it long enough for NASA to launch the old technology back into space, but he isn’t sure he can even do that. Despite his fame, Willow seems to be a bit of a recluse with the only person he trusts Jasper who is his friend from college who works for the FBI.

As we approach the ¼ mark in the novel, we the readers and Willow are beginning to see how much these small glitches are affecting people and how in many cases it is causing people to panic and allows criminals more freedom as police are concluding that many incidents are caused by the glitches, not by people.

As we cross the ¼ mark in the novel, we learn more about Willow’s history. We learn that his partner Troy died in a car accident just before the Unitime satellites were launched. We learn from Troy’s brother that he sent him a text with a date and nothing else which happens to be the exact date that the Unitime technology started malfunctioning. Despite Willow’s personality we are now beginning to question whether this malfunctioning system was planned or completely random and what was Willow’s relationship with Troy? And how did Troy know this was going to happen years in advance?

As we approach the halfway mark in the novel, Willow despite all Jasper’s efforts to keep him hidden often goes walking about at night because he can’t get his anxiety medication anymore. On one of these midnight outings he comes across Zabby who is trying to escape her abusive father, and both accidentally make friends with a little dog called Cinder.  After a few weeks, the world has really gone to hell with almost everyone not being able to function without technology. Willow in a bid for help decides to put a message out to the public and tries harder than ever to correct the glitch but nothing works, and he seems to be completely unaware that Troy’s brother is set to kill him not even when he wants to meet with him.

As we cross into the second half of the novel, we see how all the characters are banding together to try and fix the problem or find a way to live without the technology but there are still major issues floating around in the background that hopefully will be brought to light very soon. The main issue being whether or not Willow is actually responsible for Tory’s death because he wanted to hide something or is Troy’s brother just a little crazy.

As we cross into the final section of the novel, the true motivations of the characters are revealed, and I must say it turned out to be an extremely interesting concept and I’d love to know where the author found this idea. Overall, I felt that a Book without Dragons was a little slow and hard to get into but the pay off was definitely worth it.

I received this review copy from NetGalley